The new patch for Dota 2 hit the client yesterday, so I decided to publish my Doom build (now obsolete, the hero has been reworked) for the previous patch, 6.85. It’s though as a game analysis of a very dominant strategy that was not seen that often on western servers. 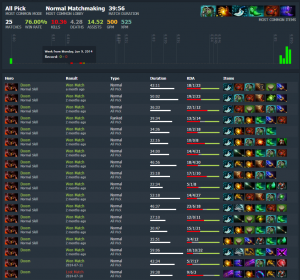 The (Chinese) Doom in the 6.85/6.85b meta is played on the offlane. FORGET THE JUNGLE. If you go jungle with Doom in this meta, prepare to be called names and uninstall Dota afterwards. The important part is that you don’t play the afk-farming game with the new Doom; you need to be super aggressive with Scorched Earth, it’s that ridiculous, even after the 6.85b nerfs.

Doom is incredibly strong early on by running enemies down with his new buffed Scorched Earth in the laning phase.

As Doom you want to duolane the offlane. Lich is his PERFECT lane partner; he fixes the only real downside of Doom which is his abysmally low armor. The Doom & Lich combo is one of the strongest offlanes in this meta and almost guarantees an easy lane and at least a few kills. Lich would skill 1-1-1: We need Sacrifice to control the creep equilibrium and deny XP/Gold, Frost Blast for the slow/nuke and Ice Armor to dive towers.

A usual kill combo goes like this: Lich casts Ice Armor on Doom and initiates with his nuke to slow the enemy down. Doom pops his Scorched Earth while running him down and hitting occasionally. With Tranqs, Frost Armor and Scorched Earth, Doom can *easily* dive the T1 tower without too much hassle. Don’t back down when going in!

For ez lane harass and even more kill potential consider devouring a Mud Golem, as you get a free stun (has no mana cost) each 30 seconds which ties very well into the kill combo and skill cooldowns. Otherwise Alpha Wolf should be the usual priority, sometimes a Centaur can be good for the AoE stun.

His skill build should generally be 2-4-0-1, being less greedy and maximizing early kill potential, survivability and damage, as Scorched Earth scales so insanely well. If the lane is really easy one can get away with 4-2-0-1 (maxing Devour), but I don’t recommend it. At the start of the game skill Q first; with the bounty rune and a big jungle creep (bird, centaur or satyr) Doom hits level 2 by the 30 second mark.

For items, aside from the usual we start with a RoP (builds into Tranqs on the lane and gives much needed early game armor) into Tranqs (If with Lich, go for kill combo now), into OoV (Trade hits with the enemy at this point).

Depending on how well the lane goes, either go for Midas (2+ kills secured) or directly Drums (no or little kills) now. A Blink Dagger should be your next item to ensure getting off your surprise ultimate. NOTE: Doom’s cast point really sucks, consider going for Shadow Blade instead if you trouble casting Doom.

If you went for Tranqs, you most certainly will have mana problems by now. Consider building a Soul Ring (goes well with Tranq HP reg and Scorched Earth), Aghanims (which also helps shutting down specific heroes for real) or rely on your lane support (Arcane Boots) for mana. Your next core item should be either AC or Shivas, for your most precious armor.

By now you should be winning the game; otherwise go for extension items like Heart/Refresher and pressure constantly with BoT.

Link to the Steam Guide: http://steamcommunity.com/sharedfiles/filedetails/?id=547073137